Annual General Meeting of the Bank for International Settlements

Central Bank of Iceland Governor Már Guðmundsson attended the Annual General Meeting of the Bank for International Settlements (BIS) in Basel, Switzerland, on 30 June 2019. The BIS is a limited liability company owned by sixty central banks and is a forum for international collaboration among central banks and financial supervisors, as well as a research institution and a bank serving central banks around the world.

Presented at the meeting was the BIS’ Annual Report, which includes its annual accounts and a description of its activities. The BIS prepares its financial statements using special drawing rights (SDR) as a unit of account. During the last accounting year, the bank’s net profit totalled SDR 461 million. It was decided at the meeting that a portion of the profit, or SDR 136.7 million, would be paid to shareholders as a dividend. The Central Bank of Iceland holds 1,070 shares in the bank and will therefore receive a dividend of 45 million krónur at the current exchange rate.

The BIS also issued its Annual Economic Report on the global economy and other topics, mainly those of concern to central banks and supervisory agencies. The first chapter of the report contains a general discussion of the global economic outlook and policy challenges. BIS General Manager Agustín Carstens gave a speech on these issues at the annual meeting. The second chapter focuses on monetary policy frameworks in emerging market economies. The third chapter of the report discusses big tech companies’ penetration of the financial sector and the potential benefits and risks associated with it.

Amit Seru, Professor of Finance at Stanford University, delivered a lecture commemorating the late Andrew Crockett, former General Manager of the BIS. Entitled “Regulating banks in the era of fintech shadow banks”, the lecture centred on financial market regulation during a time when financial technology (fintech) shadow banks — which fall outside the conventional regulatory framework — are growing worldwide in terms of credit system market share.

Since 2017, Governor Már Guðmundsson has chaired a group of twelve central bank governors from small open economies with independent currencies, which meets regularly at BIS fora. This was his last time leading the group’s meetings in connection with the Annual General Meeting of the BIS. He will be succeeded by Governor Mario Marcel of the Central Bank of Chile.


Speech by Agustín Carstens, General Manager of the BIS 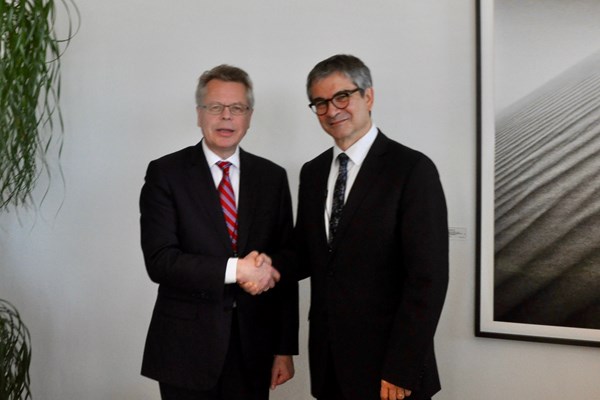