The development of the Icelandic financial system has reflected the political and economic evolution of the country from a dependency of the Danish Crown into a modern high-income republic. The government was closely involved in the early development of banking in Iceland, and the first bank was the state-owned Landsbanki Íslands (National Bank of Iceland) which was established by law in 1885. It received as capital a small issue of treasury notes, which were freely convertible into Danish crowns. The second bank, Íslandsbanki (Bank of Iceland), was a private joint-stock company mostly owned by Danish investors. It started business in 1904 and operated under special legislation giving it the right to issue notes backed by gold. After sovereignty in 1918 political opinion shifted against leaving the right to issue notes in the hands of a foreign-controlled bank. The power to issue notes was therefore gradually moved from Íslandsbanki to the state-owned Landsbanki.

Monetary policy did not play an active part in the management of the Icelandic economy in the early postwar period. Landsbanki had had the sole right since 1927 to issue notes, as well as being the main commercial bank with a market share of well over half of all deposits in banks and savings banks. With such strong commercial banking interests and limited central banking functions it is only to be expected that monetary policy should have taken a back seat in Landsbanki´s activities. An important step was taken to change this situation in 1957 when the note-issue department was given separate management as well as new instruments for regulating the liquidity of the banking system. However, this was obviously a halfway house, and in 1961 the step was finally taken of creating a fully autonomous Central Bank out of Landsbanki´s central banking department.

The Central Bank of Iceland building on the hill at Arnarhóll is one of the most distinctive buildings in the heart of the Reykjavík city centrum. The cornerstone of the building was laid by the then-current president of Iceland, Ms. Vigdís Finnbogadóttir, on 6 May 1986. The Bank moved into its new headquarters in 1987, after having shared facilities with Landsbanki Íslands in three buildings located in Austurstræti and Hafnarstræti. For the most part, the building at Arnarhóll is custom-designed for the operations of the Central Bank and related entities. It is over 13,000 square metres in size and consists of the main building, which is five storeys tall from the Arnarhóll entrance and six storeys on the Skúlagata and Kalkofnsvegur entrance, and an adjacent building of two to three storeys. A subterranean basement lies beneath the entire building.

The building was designed by architects Guðmundur Kr. Guðmundsson and Ólafur Sigurðsson. The outer walls that face Kalkofnsvegur call to mind a fortress, reflecting the emphasis on durable long-term construction and little need for maintenance. The exterior is clad in part with aluminium, making the Bank headquarters one of the first buildings in Iceland to feature aluminium siding. The exterior of the adjacent building and the pillars of the tall portion of the main building are clad with gabbro from Hoffell in Hornafjörður fjord.

The construction of the Central Bank building has a long history. The Bank shared facilities with Landsbanki Íslands for nearly three decades. In 1978 it bought a small building on a large lot at Einholt 4 in Reykjavík, in order to merge its storage facilities, which were located in three different places in the city. A three-storey building some 2,000 square metres in size was built on this lot. This building now houses the majority of the Bank’s archives and library, together with documents from the Central Bank and National Museum of Iceland’s joint Numismatic Collection and the garages for the Bank’s motor vehicles.

Preparation for the construction of the Bank’s new headquarters moved forward in 1981, with the conclusion of an agreement with the City of Reykjavík providing for a swap of a lot owned by the Central Bank in Sölvhólsgata and the Swedish freezer plant lot at the northern end of Arnarhóll. Early in 1982, the City of Reykjavík Planning and Building Committee approved the architectural drawings for the new bank headquarters, and construction began. A celebration was held to commemorate the new construction in July 1984, and work began on exterior insulation and cladding. The cornerstone was laid by the president of Iceland, Ms. Vigdís Finnbogadóttir, on 6 May 1986.
During the construction phase, the City of Reykjavík and the Central Bank held a competition for ideas on the role and development of Arnarhóll, with an eye to beautifying the city and honouring Ingólfur Arnarson, Reykjavík’s first settler.

The building has housed other institutions in addition to the Central Bank. The Icelandic Banks' Data Centre has maintained offices there, and the National Economic Institute of Iceland was housed there during its tenure of operation. 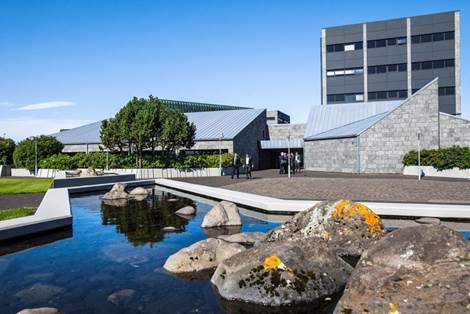