The Spring Meetings of the International Monetary Fund 2019

Governor Már Gudmundsson attended the Spring Meetings of the IMF’s International Monetary and Financial Committee, IMFC, which were held in Washington DC 12-14 April. Governor Gudmundsson represents Iceland in the IMF’s Board of Governors, which is the Fund’s highest decision-making body. Magdalena Andersson, the Swedish Finance Minister, represented the Nordic and Baltic countries in the Committee on this occasion. Her statement on behalf of the eight countries can be seen here. 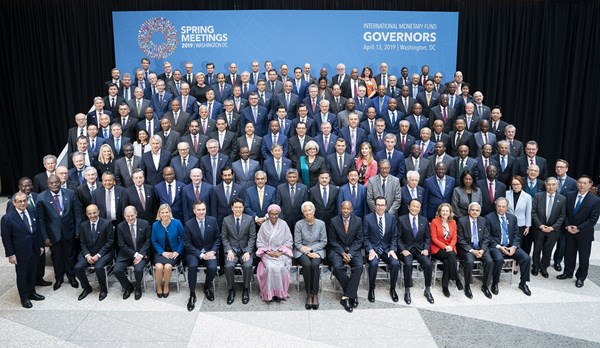 Photo of Governors at the IMF meeting in April 2019. An enlarged picture can be reached below.

At the IMFC plenary session, the Managing Director of the Fund, Christine Lagarde, presented her Global Policy Agenda, which outlines the Fund’s assessment of developments in the global economy, as well as key challenges and tasks that lie ahead. Global growth has softened after two years of strong expansion, i.a. due to trade and geopolitical tensions and policy uncertainty. Medium-term prospects are moderate due to low labour productivity growth and population aging while policy space remains constrained. Member countries were encouraged to act through domestic and multilateral policies to strengthen growth, enhance resilience and promote inclusion. Global solutions include strengthening the rules-based multilateral trade system, reducing debt vulnerabilities, tackling cross-border tax avoidance and upgrading and implementing the global financial regulatory reform agenda.

The IMFC communiqué approved at the end of the meeting highlighted the need to take joint action to protect the global expansion, including through strengthening international cooperation and frameworks. The IMFC reaffirmed its commitment to a strong, quota-based and adequately resourced IMF at the center of the GFSN and requested the Executive Board to continue its work on IMF resources and governance and conclude its work on the 15th General Review of Quotas no later than the Annual Meetings next October.

Before the Spring Meetings, Governor Már Gudmundsson held a speech and participated in round table discussions at the University of Virginia’s Miller Center in Charlottesville. After the Spring Meetings, the Governor participated in a round table discussion of central bankers and university professors on the challenges to monetary and fiscal policy in small open economies.
Links to the referenced documents can be found below:

A photo of Governor Már Gudmundsson with Christine Lagarde, Managing Director of the IMF, as well as a photo of the IMF’s Board of Governors, taken at the Spring Meetings.