Governor Már Gudmundsson attended the spring meeting of the IMF‘s International Monetary and Financial Committee, IMFC, which was held in Washington on 20-21 April. On this occasion he represented the Nordic and Baltic countries in the Committee. His statement on behalf of the eight countries can be read here (and below). The Governor of the South African Reserve Bank, Letesja Kganyago, chaired the meetings of the Committee for the first time, having been elected Chairman earlier in the year.

Central Bank of Iceland representatives also met with Tao Zhang, one of the Deputy Managing Directors of the Fund, as well as other senior officials and experts of the Fund. They also attended conferences held in connection with the IMFC meeting.

At the meeting of the IMFC, the Managing Director of the Fund, Christine Lagarde, presented her Global Policy Agenda which outlines the Fund’s assessment of developments and prospects for the global economy, as well as the key challenges and tasks that lie ahead. In the short-term, global economic growth is expected to be driven by a strong rebound in investment and trade, but the medium-term outlook for global economic growth is weaker. Various challenges and potential risks ahead are linked inter alia to financial stability and potential trade barriers. Member countries were encouraged to strengthen financial stability, rebuild fiscal policy space by reducing government debt and implementing structural reforms order to maintain sustainable and inclusive economic growth. In addition, they were encouraged to promote a rules-based multilateral trade system and to strive to durably reduce excess global imbalances.

According to the IMFC communiqué approved at the end of the meeting, GDP growth has picked up and is increasingly broad-based. Increased risk in financial markets, trade tensions and high debt levels in the world can, on the other hand, have a negative impact on GDP growth to the medium-term. Emphasis was placed on strengthening the fundamentals of the economy while a window of opportunity remains open to support economic growth and increase resilience. Structural reforms should aim to lift productivity, potential growth and employment, and make sure that policies enhance inclusion by sharing the gains from technology and economic integration.

Links to the referenced documents can be found below:

Photo from the IMFC meeting and a photo of central bank governors and representatives to the IMF Board of Governors, also taken at the meeting. 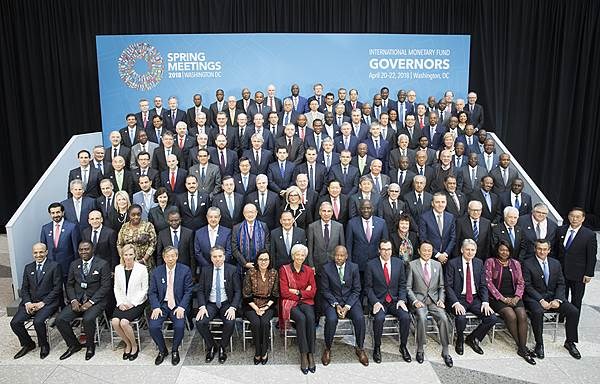