Minutes of the second meeting of the Macroeconomic Council 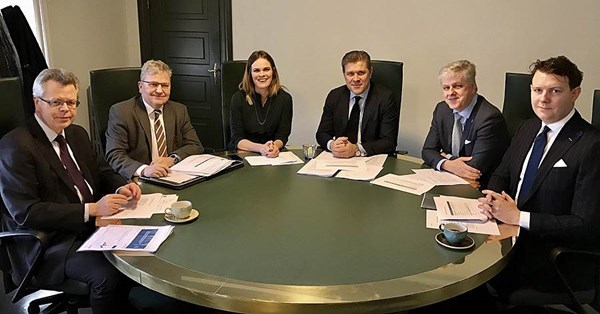 The second meeting of the Macroeconomic Council was held on 6 April 2017. Members of the Council are the Prime Minister, the Minister of Finance and Economic Affairs, Minister for the Environment and Natural Resources, executives from the Confederation of Icelandic Employers, Association of Local Authorities, and Central Bank of Iceland.

The objective of the Macroeconomic Council is to strengthen the coordination of economic policy with decisions in the labour market. At its meetings, the Council is to discuss the economic situation and the shared context of public sector finances, monetary policy, and labour market issues in connection with key aspects of economic policy, with particular focus on areas where coordination is lacking. The Council is to meet at least twice a year and publish the minutes of its meetings on the websites of member institutions. Central Bank Governor Már Guðmundsson signed the declaration of association of the Macroeconomic Council on behalf of the Central Bank of Iceland. At the meeting, he discussed the economic outlook and main challenges facing monetary policy. Central Bank officers attending the meeting in addition to the Governor were Chief Economist Þórarinn G. Pétursson and Deputy Chief Economist Rannveig Sigurðardóttir.

The Governor’s slide presentation from the meeting can be found here: The economic situation - successes and challenges for monetary policy

The photo was taken at the second meeting of the Macroeconomic Council on 6 April 2017. From left: Mar Gudmundsson, Governor of the Central Bank of Iceland, Karl Björnsson, CEO of the Icelandic Association of Local Authorities, Björt Ólafsdóttir, Minister for the Environment and Natural Resources, Bjarni Benediktsson, Prime Minister of Iceland, Benedikt Jóhannesson, Minister of Finance and Economic Affairs, and Halldór Benjamín Þorbergsson, CEO of SA - Business Iceland.Back
Tweet