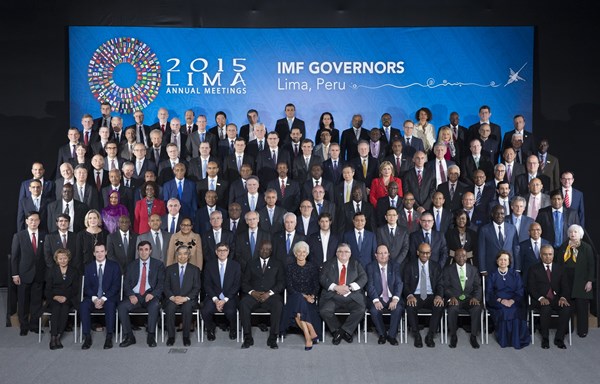 The 2015 annual meetings of the International Monetary Fund (IMF) and the International Monetary and Financial Committee (IMFC) were held on 9-11 October in Lima, Peru. Governor Már Guðmundsson, Iceland’s representative on the IMF Board of Governors, attended the meetings and gave a speech for the Annual meeting on behalf of the Nordic-Baltic Constituency. The Constituency’s representative on the IMFC was Øystein Olsen, Governor of Norges Bank.

Early last week, Már Guðmundsson gave a speech at the annual convention of the Reinventing Bretton Woods Committee, held in collaboration with the Banco Central de Reserva del Perú. He also met with representatives of financial institutions and credit rating agencies, as well as attending a meeting of the Group of Trustees of the Principles for Stable Capital Flows and Fair Debt Restructuring, of which he is a member.

According to the statement released by the IMFC, The global recovery continues, but growth remains modest and uneven overall. . The statement also says that the financial markets had been volatile and that further uncertainty can be expected. Medium-term growth prospects have weakened since the beginning of the year. The IMF’s key global policy priorities are “to take further measures to lift short-term and potential growth, preserve fiscal sustainability, reduce unemployment, manage financial stability risks, and support trade.”

Further information relating to the IMF annual meetings and related activities can be found on the links below:

Communiqué of the Thirty-Second Meeting of the International Monetary and Financial Committee, October 2015

Statement by the Hon. Már Guðmundsson, Governor of the Fund for Iceland, on behalf of the Nordic-Baltic Constituency

Video of Hon. Már Guðmundsson’s statement, on behalf of the Nordic-Baltic Constituency