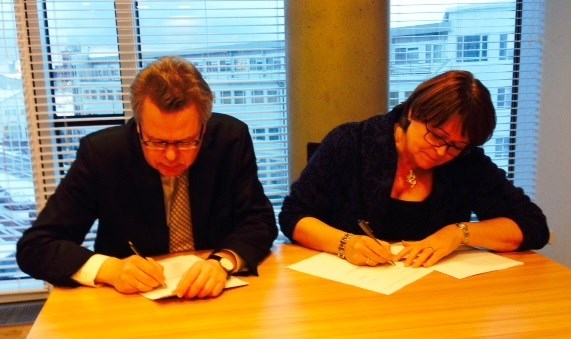 The Financial Supervisory Authority and the Central Bank of Iceland concluded a new, revised cooperation agreement on 1 December 2014. On the same date, the two institutions signed an agreement on the execution of liquidity oversight and supervision for credit institutions.

The photo was taken when Már Guðmundsson, Governor of the Central Bank of Iceland, and Unnur Gunnarsdóttir, Director General of the Financial Supervisory Authority, signed the agreement.

The objectives of the cooperation agreement are to formalise the cooperation and exchange of information between the two institutions and to coordinate with the Financial Stability Council’s responses to systemic risk. According to the agreement, in order to achieve these objectives, it is necessary that the cooperative efforts of the two institutions, including in the forum of the Systemic Risk Committee and the Financial Stability Council, aim at identifying and assessing systemic risk. Furthermore, the analysis of financial stability should establish the strengths and weaknesses of the financial system, and the analysis of important entities’ should give a clear view of their resilience. In order to assess the current situation and the outlook for the financial system and systemic risk, the contracting institutions have established five joint risk assessment groups that operate year-round: a credit risk group, a market risk group, a liquidity and funding risk group, a financial infrastructure risk group, and a micro/macro risk group.

In compiling information from supervised entities, attempts are made to collaborate on report preparation. It is emphasised that information should be exchanged between the institutions promptly and regularly and that communications should be efficient and secure.