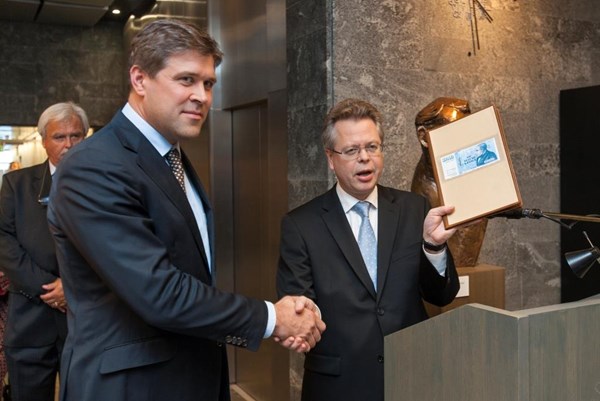 The pictures show on the one hand a sample of the front page of the new note and on the other hand where Már Guðmundsson, Governor of the Central Bank of Iceland, hands over the new 10000 krónur note number one to the Minister of Finance in Iceland, Bjarni Benediktsson, for preservation in a museum owned by the Icelandic people.

The Central Bank of Iceland is launching Iceland’s new 10,000 kr. banknote today, Thursday 24 October 2013. The purpose of the issue is to facilitate and streamline payment intermediation in Iceland, in part by reducing the number of banknotes in circulation. At the end of September, there were 13.9 million banknotes in circulation, including 7.1 million 5,000 kr. notes.


The new banknote is dedicated to poet Jónas Hallgrímsson and features a number of references to Jónas and his work. The banknote is similar in appearance to those already in circulation and will incorporate a greater number of new, more advanced security features. The background colour of the note is blue. The note was designed by Kristín Þorkelsdóttir and Stephen A. Fairbairn.

A conventional feature for the blind can be found on the note, in the form of four raised horizontal lines on the obverse. The Optiks feature can be used as an identifier for the blind. The 10,000 kr. note is 70 x 162 mm in size and is therefore 7 mm longer than the 5,000 kr. note, helping users to distinguish between the two.

The new notes were printed by De La Rue Plc. in the UK. De La Rue and its predecessors have handled banknote printing for Iceland for 83 years. Four million banknotes were printed at a purchase price of 29 kr. each, whereas two 5,000 kr. notes would have cost 36 kr. (18 kr. each). In this context, it should be noted that the security features of the new banknotes, including the Optiks feature, are more expensive.

See as well here: Banknotes and coin in Iceland.