An important element in reinforcing the Surveillance Unit is to improve the Central Bank’s information gathering from both financial undertakings and other parties. Co-operation with public entities will also be enhanced. The Bank works closely with the Financial Supervisory Authority on investigations of violations of the Foreign Exchange Act and the Rules set pursuant to it. In the recent term, a number of cases have been under scrutiny by the Central Bank, and several of them are now being investigated more closely.

The reorganisation of the Surveillance Unit has no effect on the capital account liberalisation strategy announced on August 5, 2009. According to that strategy, the first stage of capital control removal is to take place no later than November 1, 2009, provided that certain conditions are met. An important aspect of the strategy is to strengthen the surveillance of the capital controls that remain and to enforce them more strictly.

Further information can be obtained from Ingibjörg Guðbjartsdóttir, head of the Capital Controls Surveillance Unit of the Central Bank of Iceland, at tel +354 569 9600. 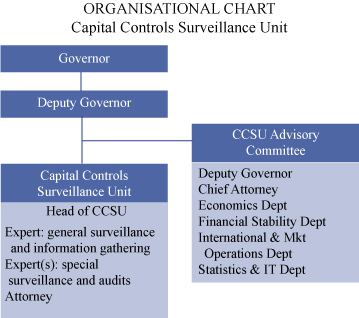